Important note: hardware acceleration (for specific file formats and algorithms only, see the above chart for details) works properly only on Windows Server 2003/2008/2012 and Windows 7/8/8.1/10 (32-bit or 64-bit); specific versions of NVIDIA/AMD drivers are required; some other restrictions apply (e.g. for some file formats, it is implemented for brute-force attack only, while dictionary attack only works on the CPU, regardless the settings).

Unlike competition, Elcomsoft Distributed Password Recovery is not ‘virtually’ or ‘practically’ linear in scalability. By doubling the number of PCs working on a password, you cut the time required to recover a password by half.

By only transferring the bare minimum of information over the network, Elcomsoft Distributed Password Recovery allows for massively parallel operation, and scales linearly to as many as 10,000 workstations with no scalability overhead.

Elcomsoft Distributed Password Recovery enables distributed work over the LAN, Internet, or both. Minimum bandwidth requirements ensure no scalability overhead even for the slowest connections.

Users can quickly deliver additional computing power on demand by utilizing Amazon’s GPU-accelerating EC2 Compute Units and Microsoft Azure instances. Depending on performance requirements and budget constraints, Amazon EC2 or Microsoft Azure instances can quickly scale to speed up the job, and can be scaled back when not in use. Elcomsoft Distributed Password Recovery running in an Amazon cloud is a perfect solution when additional computational power is needed without the need to invest into building permanent infrastructure in-house.

With Elcomsoft Distributed Password Recovery supporting cloud compute instances, users can get as much speed as they need the moment they need. Support for additional cloud services is coming soon.

The use of virtual machines is on the rise, enabling criminals cover their activities under a virtual umbrella. While storing massive amounts of evidence, an encrypted virtual machine can greatly reduce the risks of an accidental leak of incriminating evidence. Elcomsoft Distributed Password Recovery helps investigators gain access to all of that evidence by breaking the original encryption password.

Three of the most popular virtual machines are supported: VMware, Parallels, and VirtualBox. The tool can attack and recover the original VM encryption passwords, helping investigators to gain access stored in encrypted images.

The included Elcomsoft Hash Extractor tool allows extracting encryption metadata from a wide range of file formats. By using encryption metadata to set up attacks, you are automatically ensuring that, in a case of a breach, absolutely no raw or encrypted data falls into the wrong hands as none is included in the extracted hash files.

Elcomsoft Hash Extractor enables to set up attacks on a tiny hash file instead of the original, potentially large file or document. Since no raw or encrypted data is included in encryption metadata, the hash files produced with Elcomsoft Hash Extractor offer significantly higher level of privacy, allowing remote and cloud processing without the risk of a content leak.

The optional portable version of this tool allows for better portability and flexibility, offering significantly easier extraction of password and encryption hashes from live systems.

Using brute force attack to recover passwords, it is possible, though time-consuming, to recover passwords from popular applications with the power of the computer’s main CPU. However, the computational power of a general purpose CPU is no longer sufficient to break into many types of data protected with modern encryption methods. Manufacturers utilize tens of thousands of iterations to intentionally slow down the recovery, making the job effectively impossible for all but the simplest passwords.

Today's PC motherboards support multiple video cards. Thanks to ElcomSoft's proprietary heterogeneous computing, Elcomsoft Distributed Password Recovery supports a mix of up to 32 video cards even if they are of different makes and models, allowing for even faster password recovery applications for a modest increase in hardware costs. The tool allows mixing NVIDIA and AMD boards of different generations in a single PC. 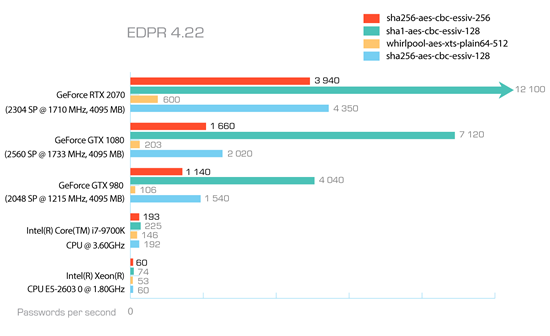 Other Passwords and Hashes

Elcomsoft Distributed Password Recovery is licensed based on the number of instances (agents). We accept all major credit cards, checks, bank transfers and purchase orders. Sales taxes may be added to your order according to your jurisdiction. Credit card orders are processed immediately. Electronic licenses are generally available instantly after the credit card charge is approved. On rare occasions where we must manually verify your order, the license will be available in 48 hours or less.